Warning: "continue" targeting switch is equivalent to "break". Did you mean to use "continue 2"? in D:\wwwroots\www.sonic-center.org\includes\classes\user.php on line 515
 Gregory Wornell - Team | SONIC Center 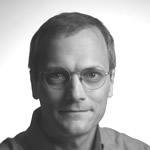 Gregory W. Wornell received the B.A.Sc. degree (with honors) from the University of British Columbia, Canada, and the S.M. and Ph.D. degrees from the Massachusetts Institute of Technology, all in Electrical Engineering and Computer Science, in 1985, 1987 and 1991, respectively.

Since 1991 he has been on the faculty at MIT, where he is the Sumitomo Professor of Engineering in the department of Electrical Engineering and Computer Science. At MIT he leads the Signals, Information, and Algorithms Laboratory within the Research Laboratory of Electronics. He is also chair of Graduate Area I (Information and System Science, Integrated Electronic and Photonic Systems, Physical Science and Devices, and Bioelectrical Science and Engineering) within the EECS department's doctoral program. He has held visiting appointments at the Department of Electrical Engineering and Computer Science at the University of California, Berkeley, CA, in 1999-2000, at Hewlett-Packard Laboratories, Palo Alto, CA, in 1999, and at AT&T Bell Laboratories, Murray Hill, NJ, in 1992-3.

His research interests and publications span the areas of signal processing, information theory, statistical inference, and digital communication, and include digitally-enhanced analog circuits and systems, algorithms and architectures for wireless and sensor networks, multimedia applications, and imaging systems, and aspects of computational biology and neuroscience. He has been involved in the Signal Processing and Information Theory societies of the IEEE in a variety of capacities, including serving on the Executive Editorial Board of the IEEE Transactions on Information Theory and the Senior Editorial Board of IEEE Signal Processing Magazine, and maintains a number of close industrial relationships and activities. He has won a number of awards for both his research and teaching, and is a Fellow of the IEEE.