Warning: "continue" targeting switch is equivalent to "break". Did you mean to use "continue 2"? in D:\wwwroots\www.sonic-center.org\includes\classes\user.php on line 515
 H.-S. Philip Wong - Team | SONIC Center 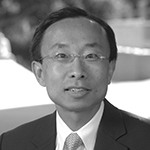 H.-S. Philip Wong joined Stanford University as Professor of Electrical Engineering in September 2004. From 1988 to 2004, he was with the IBM T.J. Watson Research Center. He held various positions, from Research Staff Member to Manager and Senior Manager. While he was Senior Manager, he had responsibility for shaping and executing IBM’s strategy on nanoscale science and technology as well as exploratory silicon devices and semiconductor technology. His present research covers a broad range of topics including carbon nanotubes, biosensors, self-assembly, exploratory logic devices, nanoelectromechanical relays, device modeling, and novel memory devices such as phase change memory and metal oxide resistance change memory. He is a Fellow of the IEEE and has served on the Electron Devices Society AdCom as an elected member (2001–2006). He has served as the Editor-in-Chief of the IEEE Transactions on Nanotechnology (2005–2006), as subcommittee Chair of the ISSCC (2003–2004), and as General Chair of the IEDM (2007), and is currently a member of the Executive Committee of the Symposia of VLSI Technology and Circuits (2007–). He received his B.Sc. (Hons.), M.S., and Ph.D. from the University of Hong Kong, Stony Brook University, and Lehigh University, respectively. He currently holds the Chair of Excellence of the French Nanosciences Foundation.