Warning: "continue" targeting switch is equivalent to "break". Did you mean to use "continue 2"? in D:\wwwroots\www.sonic-center.org\includes\classes\user.php on line 515
 Lav R. Varshney - Team | SONIC Center 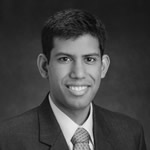 He was a research staff member at the IBM Thomas J. Watson Research Center, Yorktown Heights, NY from 2010 until 2013. He was a postdoctoral associate and research assistant in the Signal Transformation and Information Representation Group in the Research Laboratory of Electronics, a National Science Foundation graduate research fellow, and a research assistant in the Laboratory for Information and Decision Systems at MIT. He was an instructor in the MIT Department of Electrical Engineering and Computer Science in Spring 2009 and a teaching assistant in Fall 2006. He was a visitor at the Laboratoire de Théorie de l'Information and the Laboratoire de Théorie des Communications at the École Polytechnique Fédérale de Lausanne, Switzerland in 2006, a visiting scientist at Cold Spring Harbor Laboratory, Cold Spring Harbor, New York in 2005, a research engineering intern at Syracuse Research Corporation, North Syracuse, New York during 2002-2003 and an engineering intern at Sensis Corporation, DeWitt, New York in 2001. His research interests include information and coding theory, collective intelligence, signal processing and data analytics, sociotechnical systems, neuroscience, and computational creativity.

Dr. Varshney is a member of Tau Beta Pi, Eta Kappa Nu, Sigma Xi, and IEEE. He received the IBM Faculty Award in 2014 and was a finalist for the Bell Labs Prize in both 2014 and 2016. He received the Jin-Au Kong Award Honorable Mention for Electrical Engineering doctoral thesis, the Ernst A. Guillemin Thesis Award for Outstanding Electrical Engineering S.M. Thesis, the 2015 Data for Good Exchange Paper Award, a best paper award at the 2012 SRII Global Conference, the Capocelli Prize at the 2006 Data Compression Conference, the Best Student Paper Award at the 2003 IEEE Radar Conference, and was a winner of the IEEE 2004 Student History Paper Contest. His work appears in the anthology, The Best Writing on Mathematics 2014 (Princeton University Press). He currently serves on the advisory board of the AI XPRIZE.