Warning: "continue" targeting switch is equivalent to "break". Did you mean to use "continue 2"? in D:\wwwroots\www.sonic-center.org\includes\classes\user.php on line 515
 Andrew C. Singer - Team | SONIC Center 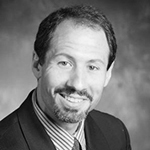 Andrew C. Singer received the S.B., S.M., and Ph.D. degrees, all in electrical engineering and computer science, from MIT in 1990, 1992, and 1996, respectively. Since 1998, he has been on the faculty of the Department of Electrical and Computer Engineering and the Coordinated Science Laboratory at the University of Illinois at Urbana-Champaign, where he currently holds a Fox Family Professorship. From 1996 to 1998, he was a Research Scientist at Sanders, A Lockheed Martin Company in Manchester, New Hampshire, where he designed algorithms, architectures, and systems for a variety of DOD applications. His research spans signal processing and communication systems,  information theory and machine learning. His work on the interplay between forward error correction (channel coding) and symbol detection (equalization) is widely cited for its important contributions to turbo-equalization. In 2000, Singer co-founded Intersymbol Communications, Inc., a fabless semiconductor IC company that brought an ADC-based mixed-signal chip-set for electronic dispersion compensation to the optical market. In 2007, Intersymbol was acquired by Finisar Corporation (NASDAQ: FNSR). Singer led the cross-cutting theme on Network Connectivity across the six focus centers of the SRC-funded MARCO focus center research program. His work has led to more than 10 patents and nearly 200 publications. His honors include designation as an IEEE Signal Processing Society distinguished lecturer (2014), IEEE Fellow (2009); an NSF CAREER Award (2000); a Xerox Faculty Research Award (2001); and selection as a Willett Faculty Scholar (2002, 2005). In 2005, he was appointed the Director of the Technology Entrepreneur Center at Illinois, and in 2013 Special Advisor to the Dean for Innovation and Entrepreneurship, where he directs a wide range of entrepreneurship activities for the University.