Warning: "continue" targeting switch is equivalent to "break". Did you mean to use "continue 2"? in D:\wwwroots\www.sonic-center.org\includes\classes\user.php on line 515
 Naresh Shanbhag - Team | SONIC Center 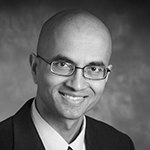 Naresh Shanbhag received his Ph.D. degree in electrical engineering from the University of Minnesota in 1993. From 1993 to 1995, he worked at AT&T Bell Laboratories at Murray Hill, where he was the lead chip architect for AT&T’s 51.84 Mb/s transceiver chips over twisted-pair wiring for Asynchronous Transfer Mode (ATM)-LAN and very high-speed digital subscriber line (VDSL) chip-sets. Since August 1995, he has been with the University of Illinois at Urbana-Champaign, where he is currently a Jack Kilby Professor of Electrical and Computer Engineering. His research interests are in the design of integrated circuits and systems for broadband communications, including low-power/high-performance VLSI architectures for error-control coding, equalization, and digital signal and image processing. Shanbhag received the 2010 Richard Newton GSRC Industrial Impact Award and became an IEEE Fellow in 2006. He received the 2006 IEEE Journal of Solid-State Circuits Best Paper Award, the 2001 IEEE Transactions on VLSI Best Paper Award, the 1999 IEEE Leon K. Kirchmayer Best Paper Award, the 1999 Xerox Faculty Award, the Distinguished Lectureship from the IEEE Circuits and Systems Society (1997), the National Science Foundation CAREER Award (1996), and the 1994 Darlington Best Paper Award from the IEEE Circuits and Systems Society.

Dr. Shanbhag is serving as an Associate Editor for the IEEE Journal on Exploratory Solid-State Computation Devices and Circuits (2014-16), served as an Associate Editor for the IEEE Transaction on Circuits and Systems: Part II (97-99) and the IEEE Transactions on VLSI (99-02 and 09-11), respectively. He was the General Chair of the 2013 IEEE Workshop on Signal Processing Systems, the General co-Chair of the 2012 IEEE International Symposium on Low-Power Design (ISLPED), the Technical Program co-Chair of the 2010 ISLPED, and served on the technical program (wireline subcommittee) committee of the International Solid-State Circuits Conference (ISSCC) from 2007-11. Since January 2013, he is the founding Director of the Systems On Nanoscale Information fabriCs (SONIC) Center, a 5-year multi-university center funded by DARPA and SRC under the STARnet phase of FCRP. In 2000, Dr. Shanbhag co-founded and served as the Chief Technology Officer of Intersymbol Communications, Inc., a venture-funded fabless semiconductor start-up that provides DSP-enhanced mixed-signal ICs for electronic dispersion compensation of OC-192 optical links. In 2007, Intersymbol Communications, Inc., was acquired by Finisar Corporation, Inc., a publicly traded company (NASDAQ: FNSR).