Warning: "continue" targeting switch is equivalent to "break". Did you mean to use "continue 2"? in D:\wwwroots\www.sonic-center.org\includes\classes\user.php on line 515
 Rob A. Rutenbar - Team | SONIC Center 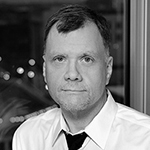 Rob A. Rutenbar received his Ph.D. degree from the University of Michigan, Ann Arbor, in 1984. From 1984 to 2009, he was on the faculty at Carnegie Mellon University, Pittsburgh, PA, where he held the Stephen J. Jatras (E’47) Chair in Electrical and Computer Engineering. In 2010 he joined the University of Illinois at Urbana-Champaign, where he is currently the Abel Bliss Professor and Head of Computer Science. He has worked on tools for custom circuit synthesis and optimization for over 25 years. His most recent work focuses on silicon accelerator architectures for computationally challenging tasks such as speech recognition as probabilistic inference. He has published over 150 papers, and his work has been featured in venues ranging from EE Times to The Economist magazine. Dr. Rutenbar has won many awards over his career. He has won several Best Paper Awards, e.g., at the Design Automation Conference in 1987, 2002, and 2010; at Design, Automation and Test in Europe 2007; and the 2011 Donald O. Pederson Award for Best Paper in IEEE Trans. CAD. He was the 2001 winner of the Semiconductor Research Corporation Aristotle Award for excellence in education and the 2007 winner of the IEEE Circuits and Systems Industrial Pioneer Award for his work in making analog synthesis as a commercial technology. He is a Fellow of the ACM and IEEE.