Warning: "continue" targeting switch is equivalent to "break". Did you mean to use "continue 2"? in D:\wwwroots\www.sonic-center.org\includes\classes\user.php on line 515
 Jan M. Rabaey - Team | SONIC Center 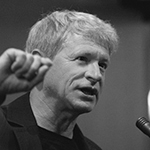 Jan M. Rabaey received the EE and Ph.D. degrees in applied sciences from the Katholieke Universiteit Leuven, Belgium. From 1983 to 1985, he was connected to UC Berkeley as a Visiting Research Engineer. From 1985 to 1987, he was a research manager at IMEC, Belgium, and in 1987, he joined the faculty of the Electrical Engineering and Computer Sciences department of the University of California, Berkeley, where he now holds the Donald O. Pederson Distinguished Professorship. He is currently the scientific co-director of the Berkeley Wireless Research Center (BWRC), as well as the director of the FCRP Multiscale Systems Research Center (MuSyC). He is also the founding director of the Ubiquitous Swarm Lab at Berkeley. Prof. Rabaey has received numerous scientific awards, including the 2008 IEEE CAS Society Mac Van Valkenburg Award, the 2009 EDAA Lifetime Achievement Award, and the 2010 SIA University Researcher Award. He is an IEEE Fellow and a member of the Royal Flemish Academy of Sciences and Arts of Belgium. In 2012, he received an honorary doctorate from Lund University in Sweden. He has published more than 400 papers in journals and leading conferences and is the author of some highly acclaimed and influential textbooks. Prof. Rabaey serves on the technical advisory boards of a range of companies and research institutes. His current research interests include the conception and implementation of next-generation integrated wireless systems, with special emphasis on ultra-low-power design and system-level reliability and availability. He has been active in a broad range of successful, high-impact research programs over a wide variety of topics, including integrated circuits, design automation, signal processing, networking, and communications. His key contributions cover areas such as switched capacitor simulation and design (DIANA-SC), high-level synthesis and compilation (LAGER, CATHEDRAL, and HYPER), low-power design (concurrency for energy efficiency), wireless internet devices (InfoPad, the first mobile net-book), reconfigurable architectures and processors (PADDI-I and PADDI-II, Pleiades), wireless sensor networks and integrated wireless sensor nodes (PicoRadio and PicoNode), and, most recently, ultra-low-power, short-distance wireless communication (targeting biomedical applications and brain-machine interfaces).