Warning: "continue" targeting switch is equivalent to "break". Did you mean to use "continue 2"? in D:\wwwroots\www.sonic-center.org\includes\classes\user.php on line 515
 Sharad Malik - Team | SONIC Center 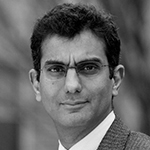 He has received the DAC Award for the most cited paper in the 50-year history of the conference (2013), the CAV Award for fundamental contributions to the development of high-performance Boolean satisfiability solvers (2009), the ICCAD Ten Year Retrospective Most Influential Paper Award (2011), the Princeton University President’s Award for Distinguished Teaching (2009), as well as several other best paper and teaching awards.  He is a fellow of the IEEE and ACM.