Warning: "continue" targeting switch is equivalent to "break". Did you mean to use "continue 2"? in D:\wwwroots\www.sonic-center.org\includes\classes\user.php on line 515
 Upamanyu Madhow - Team | SONIC Center 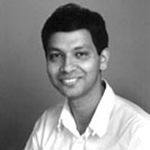 Upamanyu Madhow is Professor of Electrical and Computer Engineering at the University of California, Santa Barbara. His research interests broadly span communications, signal processing and networking, with current emphasis on millimeter wave communication, and on distributed and bio-inspired approaches to networking and inference. He received his bachelor's degree in electrical engineering from the Indian Institute of Technology, Kanpur, in 1985, and his Ph. D. in electrical engineering from the University of Illinois, Urbana-Champaign in 1990. He has worked as a research scientist at Bell Communications Research, Morristown, NJ, and as a faculty at the University of Illinois, Urbana-Champaign. Dr. Madhow is an IEEE Fellow, a recipient of the 1996 NSF CAREER award, and co-recipient of the 2012 IEEE Marconi prize paper award in wireless communications. He has served as Associate Editor for the IEEE Transactions on Communications, the IEEE Transactions on Information Theory, and the IEEE Transactions on Information Forensics and Security. He is the author of the textbooks Fundamentals of Digital Communication, published by Cambridge University Press in 2008, and Introduction to Communication Systems, published by Cambridge University Press in 2014.